Sometimes you’re just hungry, aren’t you. Not just hungry but, like, HUUNNGGRRYYY. And those are the times when you (I) start rifling through the cupboards and start eating baking ingredients. So, because it’s day 6 of #100healthydays i decided to pre-empt this unfortunate reflex by having a hearty lunch. I adapted this recipe from the BBC Food website which you can find here. Instead of the 2 tablespoons of sunflower oil I used 2 teaspoons of coconut oil and I added Ballymaloe Jalapeno Pepper Relish.

Fresh coriander and chili pepper from the garden! 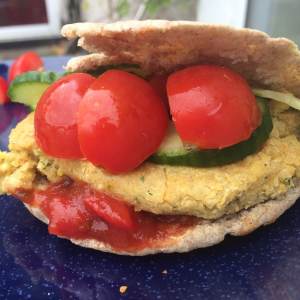 I ate two of these gorgeous burgers for lunch and I’m so glad I did because I wound up not having a chance to eat again for another 7 hours. My body is not use to such famine! The protein and fiber in the chickpeas must have really done the trick. This recipe is definitely a keeper and it barely cost anything! The coriander and fresh chili I used came from my garden, the cherry tomatoes and organic cucumber were ends of boxes and the brown pittas were on the cusp of expiry (tomorrow is shopping day.) I had used dried chickpeas, too, so they were extra-thrifty!

After a salmon and vegetable dinner, I prepared a blackberry apple sponge pudding which was possibly the most delicious thing I have ever created. I used dark muscovado sugar which gave it the most incredible deep, rich caramel-apple flavour! 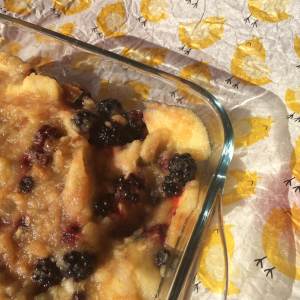 The taste of autumn.

Method:
Keeping the blackberries aside, combine the rest of the filling ingredients in a pan and stew on a gentle heat until the apples soften adding a little water to stop burning if necessary. When the ingredients have softened transfer to an ovenproof dish and stir in the blackberries.

In a separate bowl cream the butter and sugar together. Add the egg and a dash of your choice of milk and beat until combined, adding a spoon of flour if necessary to prevent curdling. Finally, add the rest of the flour and mix until smooth, being careful not to over beat the batter.

Cover the filling with the sponge batter and spread carefully over the top. Bake at 180 degrees Celsius for 25 minutes or until the sponge is cooked through. 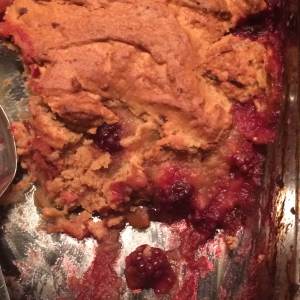 It didn’t last too long in my house…

Right, so that’s my food diary apart from porridge with banana and pb! I also went for a 45 minute walk and saw some nice greenery. 🙂 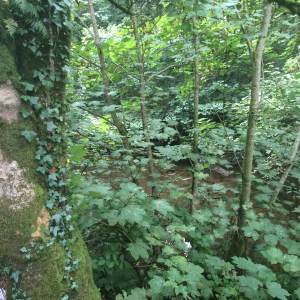 Enjoyed a river view on my outing!

It’s day 2 of the 100 Healthy Days and I feel it went ok today! I mean, in terms of food I ate a little more than yesterday but i’m still loving having time to cook (see food diary below!)

Today I had to figure out how to use up a bunch of rhubarb while still making healthy choices. The problem being that generally rhubarb needs a ton of sugar to make it palatable. I decided to use strawberries and cinnamon to sweeten the filling and to drastically reduce the sugar in the topping.

Homemade and warm from the oven – and lower in sugar!

Simply stew the filling ingredients together until the fruit has softened. Transfer this filling to an ovenproof dish.

Blitz the flour, butter and sugar together until breadcrumb-like in appearance. Stir in the oats.

Cover the filling with this topping and bake for approximately 30 minutes at 180C.

I’ve been thinking a bit about the other elements to this project that I need to tackle. For one thing, I need to learn to turn out the light early and just go to sleep! No Tumblr or Facebook last thing at night. I think being responsible at bedtime will be very important for gaining more energy, fighting off winter bugs and keeping my appetite under control!

Aside from that, I’ve booked in with an osteopath for the pains in my neck, side and knee that have been plaguing me for a while (…9 months…) I’m looking forward to getting it dealt with!

Today met with my friend Áine for lunch/coffee in town. I decided to eat at home and just have a juice and a coffee when out to try to optimise my healthy eating potential!

Roasting a selection of vegetables left over from yesterday’s dinner for soup.

Nothing beats hearty, thick soup on a rainy autumnal day!

Bonjour, mes amis! My recent absence was due at first to a singing competition and then to the awful, evil flu. I’m better now and ready to blog again -LUCKY YOU, YAY!!

Having literally eaten my body weight six times over in the last two weeks to stay alive, I have now taken up the challenge of losing 7 – 10lbs before Christmas. (I’ve said it on Twitter now, so it has to happen.) This does mean that my baking will take a step back for a while and the cooking will take a step up.
HOWEVER! I made this recipe for one of my trips to Dublin two weeks ago and it is so fast and SO EASY and reminds me of being a little person. My sister used to make a variation of this and we always called them ‘hedgehogs.”
Hedgehogs:

1: CREAM THE BUTTER AND SUGAR!

2: Add the egg, vanilla and flour a little at a time, mixing as you go until all ingredients have been used.

4: Bake for 12-15 minutes until risen and golden. Remove from oven and allow to cool on a wire rack.

5: Lightly toast the coconut on a baking tray under a grill or in a frying pan until lightly golden.
6: Spread the jam on top of each cake and dip into the toasted coconut until coated.
EAT THEM. 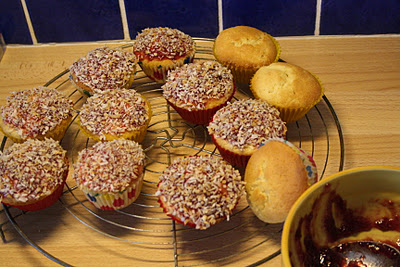 My attitude to apple tart is a bit ‘rough n’ ready.’ I firmly believe that you should just go with your instincts on this. Here’s a rough recipe for my favourite Autumnal twist on apple tart. I used nine apples that varied in size. If you make too much filling for your tart, the left over apple sauce is delicious in steaming porridge on a cold Autumn morning.

In Ireland and the UK we like to use a sharper variety of apple for baking with, commonly called ‘cooking apples.’ For this reason it’s necessary to sweeten them – just make sure you taste your filling as you go along as some apples are more tart than others, and personal preference plays a big part in apple tart. 🙂

1: Peel and chop your apples into a pan, discarding the cores and skins. Allow enough room for them to expand.
2: Add in the sultanas  and cinnamon. Drizzle over enough honey to cover the tops of the peeled apples.
3: Add 2 tbsps cold water and turn on to a gentle heat for 15- 20 minutes, stirring occasionally until most of the apples have broken down into the sauce.

Yes! Finally, the pumpkins are here! Aren’t they beautiful? I’ve literally spent the entire day making various dishes with these lovelies. It  sometimes bothers me that Irish people don’t really use pumpkins for anything other than jack-o-lanterns.  I have noticed a record number of said seasonal decorations all over Cork city, though, and they are gorgeous!I’ve never been one to sit around lamenting and not doing anything so here is my pumpkin pie experience! I’ve put together a ‘How To’ style tutorial to show you what to do with your pumpkin when it’s all big and orange and staring at you questioningly. The first step to any pumpkin recipe is to first purée the pumpkin. Once it’s puréed, you can freeze it or use it for various recipes.

1. Slice your pumpkin in half, and then into slices. Scoop out the innard-goop and put it into a bowl. You can rinse them later and bake the seeds if you want to use every part of the pumpkin. The stringy bits are great for compost!

2. Place the pieces (skin intact!) into a steamer and steam for approximately 20 minutes until soft. Remove from the steamer and allow to cool before peeling. Do NOT try to peel the slices while they’re hot! You WILL burn yourself.

3. Allow the skinless pumpkin chunks to drain in a colander for 10 minutes to get rid of excess juice. Sometimes this isn’t necessary, if you feel your pumpkin isn’t very watery, you can skip this step!

4. Whizz up the pumpkin with a hand blender, or mash with a potato masher until it’s a thick purée. Now you have your base ingredient, ready to use! If you have some left over, you can freeze it in a lunchbox or in small amount in freezer bags. 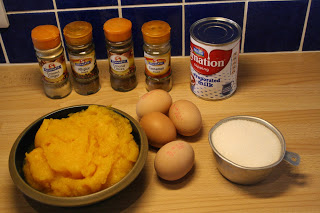 1. Mix all ingredients together with a hand mixer. It will be a very wet mixture.

2. Line a pie dish with short crust pastry. I find that this recipe makes enough for at least one extra pie, so have some extra pastry to hand, just in case!

3. Pour in the pie-filling, not filling the dish more than 3/4 full, as the mixture will rise! Bake at 200 degrees Celsius for the first 15 minutes.

4. Turn down the heat to 165 degrees Celsius and bake for a further 45 – 60 minutes, until a knife comes out clean from the centre.

I hope you try this recipe! I originally found it online somewhere about two years ago and I’ve stuck with it. It’s really delicious! I have a lovely recipe for pumpkin and spinach lasagne which I’ll post soon. Let me know what you think! x

I feel quite bad for not having posted at ALL in the last week. Last week literally nothing happened. I slept for the entire week trying to recover from the weekend before.

The show was EPIC! The only hitches happened in my set, which is okay because I feel I can take ownership over Siriusly Hazza P and Harry and the Potters’ successes in a tiny way for actually being the person who organised the concert. It was a great weekend. I just can’t stress how amazing my friends are. James and Lucy, Mary and Janice, my family – MY PIANO TEACHER, EVEN? All helped in some way and were there to support me. God. Amazing, really. The actually progression of the day went so eerily smoothly. There were no disasters. Well, my friend Martha has a seizure after my set but like, these things happen. More than 200people showed up. I’m still in shock.

The after party was cool too and culminated in me collapsing at 2.30am. Whimp.

Me:Maybe getting a cat would help you with your paranoia.
Sister: I’m not paranoid!
Me: You called the police on some mice in your house….

God I can’t believe how long it’s been since I posted, really. Here are some photos:

I was in Cheshire visiting my friends a few weeks ago. They brought me to a BOUTIQUE that was NAMED AFTER ME!

Laura and Cathrin also brought me to a bakery which had SUCH tempting confectionary. I sampled 6 cakes and took the rest home to my father. 😀

In the bakery I got a hug from Robert, my man cardi who I named after my boo, Robert Downey Jr.

Later I murdered them at the dinner table.

From the show weekend!

On Saturday we went into town with some Wizards and Witches.

Neil, Mel, James, me, Lizzy, Matt on our way to the Opera House

And in the evening I had everyone over for a barbecue at m’house:

Me with a Hazza P on either side.

Harry and the Potters working the crowd!

Me, Cathrin and Ellie doing our thang.